Aghada made the journey back to Sallybrook on Saturday last to take on the home side Glanmire in the re-fixed U-16 East Cork “A” Final after flood light failure in the first game. On a beautiful sunny afternoon the crowd was treated to a good game of ladies football.

Glanmire thundered into the game from the start and really came at Aghada as the seaside girls were slow to settle into the game. Glanmire had five points on the board before the seaside girls got their first score, this coming from the boot of Mary Leahy after twenty minutes. Once this score came the seaside girls started to play the game on their terms. Lauren Linehan and Lauren Mc Allister kicked the next two scores before Sarah Walsh was upended in the Glanmire square and from the resultant penalty Mc Allister struck the back of the Glanmire net and all of a sudden from being five points down after twenty minutes the seaside girls had pushed one clear after twenty eight minutes. Sarah Walsh added another point before Glanmire got a score of their own to leave the halftime score Aghada 1-4 Glanmire 0-6.
The most satisfying part of that first half was the tremendous defending from all our backs and keeper when the Glanmire girls dominated so early on.

The second half started the way the first ended with the seaside girls getting the first scores of this half one from Mary Leahy and two from Mc Allister, to put the seaside girls four up after thirty nine minutes play. Glanmire replied with a point of their own quickly followed by a goal and we were all square after forty seven minutes. Cometh the hour, cometh the girl and up popped Mary Leahy to score two wonderful goals to put the seaside girls six up going down the home straight. Glanmire weren’t going away and replied with a goal of their own to bring it back to a three point game with time almost up. Mc Allister kicked the insurance point for the seaside girls on the fifty ninth minute to put the game beyond Glanmire and the seaside girls were crowned East Cork U-16 A Champions 2016. After the match the cup was presented to Sarah Leahy by secretary of the East Cork Board Philip Harrington. All credit must go to this wonderful bunch of players for there commitment, determination and heart shown all year. They pulled off a wonderful double by winning the County three weeks ago and now the East Cork at the highest level in Cork County. Take a bow girls. Panel: O. Dzjack, S. Mc Allister, B. Wall, K. O’Farrell, ER. Boylan, C. Walsh, Aine Mc Grath, S. Leahy, A. Mc Grath, L. Mc Allister, S. Walsh, M. Sweeney, L. Linehan, M. Leahy, A. Quinn, M. Culligan, K. O’Keeffe, R. Leahy, E. Cronin, A. Rose, K. Terry and M. Moran.

Tickets can still be got for our Christmas Draw. This is a big fundraiser for the club and we would like to appeal to as many people as possible to support this draw. Tickets are € 2 each or three for € 5 and can be got from any member of the club.

Our victory Social for 2016 will take place on Friday night next the 2nd December in Garryvoe Hotel. The boots and shorts will be put away and will be replaced by heels and dresses. It promises to be a wonderful evening with plenty of medals to be collected. The evening will finish off with a disco from the man himself DJ Shane and once again the heels will be put away and replaced by flats as they dance the night away and celebrate what has been a wonderful year.

just a date for the diaries. Our long kick will take place on the 1st January 2017. This is a great family afternoon away from the competitive side of things where everyone can have fun and a good way to walk off those Christmas Puddings. We will confirm the time nearer the event.

Wrap Up
It has been a wonderful year for everyone involved with Aghada Ladies Football Club winning four County Championships titles, one County League and numerous East Cork League and Championships titles. It has been the most successful year in the clubs history and also a year when we won our first ever “A” County Title when the U-16’s came home with the silverware.
I would like to thank everyone who has helped out in any way during 2016, to the committee for their hard work with the running of the club, to Pat O’Connell of the Senior Club and his committee for the use of the wonderful facilities we have on our doorstep.
To all our sponsors throughout 2016 a big thank you as without your support and help we could not survive. To the board delegates who attend East Cork and County Board meetings, to the parents who text, wash jerseys, bring sandwiches and cakes to the clubhouse and who also bring their children to training and matches thank you .
To the supporters who follow us to all our games, to the coaches and management of all the teams without you the girls would not develop their skills and last but no least to the players themselves without you we would not have the wonderful club we have today. You are a credit to your club, parish and families. Finally thank you to all the clubs through out the county who have congratulated and wished Aghada well it is great to see true sportsmanship.
So as the 2016 season has drawn to a close we look forward to doing it all over again in a couple of week’s time!!! Enjoy the break. 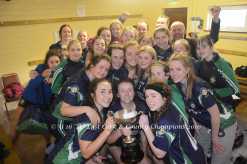 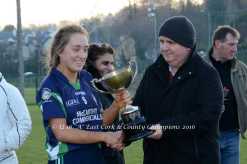