It is the end of November and the curtain has finally come down on the East Cork Ladies football on field activities with the last few finals being played.
On Wednesday night Fermoy travelled to Glanmire to take on the home side in the eagerly awaited Minor “A” final. This had been billed as one of the games of the year with both sides having met in the county semi final a few weeks ago and Fermoy just came out on top on that occasion so Glanmire were anxious to avenge that defeat
The home side sprung into action and raced ahead and led by 1-06 to just 1 point after a quarter of an hour. Fermoy clawed their way back aided by a goal from Abbie Scannell but they trailed at the interval 1-06 to 1-04. The second half was more of the same with Glanmire having the lions share but Fermoy kept in touch with some fine scores including another goal from Cork ace Scannell. Entering into injury time it was Glanmire who were leading by just two points when up pops super sub Sarah Kenny and scores a goal to give the Fermoy girls the lead for the first time in the game. Glanmire just could not break down the Fermoy defence in the last few minutes and the town ladies hung on for a great victory by the narrowest of margins finishing on a scorline 3-08 to 1-13.
Well done to both teams for a super and very exciting game fitting for an East Cork “A” minor final.

Saturday saw the meeting of Inch Rovers and Midleton in the final of the Minor plate competition
This competition has proved very popular since its introduction 3 years ago as it caters for clubs who did not play in the county championship but allows girls more competitive games at a time when games are nearing an end
Inch Rovers had waited a long time to know who their opponents would be as the other side of the draw ran into some difficulties with Midleton eventually coming through with a win in the semi final over Rockbán. Another good game of football with the Inch Ladies slightly stronger in the first half .The second half both sides made a great game of it with Inch changing their team around and playing as many girls as they could and Midleton stepping up a gear and getting a few goals to narrow the gap. In the end it was the depth of talent available to Inch Rovers that saw them over the line on a score line 4-12 to 5-02
Well done to all concerned.

The rescheduled U 16 “A” East Cork final between Aghada and Glanmire took place also on Saturday in Glanmire and just like all these sides encounters it proved to be another cracker. The sun shone brightly and the football was top drawer Glanmire raced ahead in the opening quarter and it looked as if it could be a white wash as their passing movements were slick and their finishing was clinical out scoring their opponents 5 points to one. Slowly and surely Aghada clawed themselves back into it and when they converted a penalty in the twenty third minute to give them the lead you knew it was game on. Both side exchanged further points but it was the sea side girls that held a slender lead at the break 1-04 to0-06

The second half started well as the Aghada girls extended their lead with two well taken points and then there was a period of the most exciting football we have seen all year with four goals in a five minute period (two for both sides) yes four goals in five minutes but after all that the Aghada girls were still three points ahead and started to play some outstanding team football and it took the Glanmire side all their strength to keep them out as the sea side girls pressed extremely hard. They managed to get the insurance point in the fifty ninth minute and as the final whistle blew Aghada were very worthy winners on a scorline 3-08 to 2-07.
Once again very well done to both sides as they put up a wonderful display of Ladies Football

The last game of the year in East Cork competition was the East Cork U 16 “B” Championship final between Fermoy and Bride Rovers on Monday evening .This game was played in Kilworth in almost ideal conditions if not slightly chilly for spectators

As the old saying goes (Goals Win Matches) and this was certainly true as Bride Rovers hit seven over the hour. Starting quickly they had the ball in the Fermoy net in the first few minutes and they played lovely team football which resulted in some beautiful scores and they led comfortably at the interval 4- 2 to 0-05
The experience of Bride Rovers Intercounty girls proved crucial as they controlled the game and try as the Fermoy girls might they just could not get to grips with them
The girls from the town played exceptionally well in the second half scoring some wonderful scores but in the end they was no catching their neighbours as the Rovers ran out very convincing winners on a score line 7-09 to 1-10.

There were 41 different competitions and 560 games played with fourteen different clubs winning titles. Seven East Cork clubs were also victorious at county level winning 15 titles, a great haul for the division.
Winning is all very well but in the grand scheme of life it is a very small part of it. As adults we have a responsibility to give good example to our children and to encourage their development through various sporting experiences. Thanks to everyone for helping in so many ways and a special thank you to all the girls for providing us with so many hours of enjoyment. Hopefully 2017 will be as much fun.

AGM
The Annual General Meeting of the East Cork Ladies’ Football Board takes place tonight Wednesday in Carrigtwohill Community Hall at 8 pm; all clubs are asked to be in attendance please. 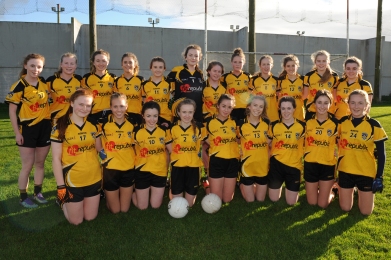 ⚠️𝙋𝙇𝙀𝘼𝙎𝙀 𝙉𝙊𝙏𝙀⚠️
10 (!!) Girls from East Cork have been selected to represent their County at u16. Massive achievement and a big congrats to all selected.
The gradings for the u12, u14 and u16 East Cork teams are now complete.
Lisgoold Ladies are holding a Virtual 5km fundraiser to raise money for their club.