Aghada made the journey to Watergrasshill on Sunday last to take on the home side in the Final of the East Cork Junior “A” Championship. On a beautiful morning but bitterly cold at the same time, the supporters were treated to a good game of ladies football. Aghada settled into this game very fast and had 1-1 on the scoreboard after four minutes courtesy of Emma Farmer. Watergrasshill fired back with 1-1 of their own and after six minutes it was all level. The Hill were next to score, before Amanda Bennett pushed the seaside girls four clear again with a well executed goal. Hannah Looney was to score next for the seaside girls before the hill came thundering into the game. They hit 1-4 without reply from the seaside girls. Farmer was to get the last score of the half a point from the left wing to leave the score at the short whistle Aghada 2-3 Watergrasshill 2-6.
The home side got the first score of the second half to push their lead out to four points. Cork ace Farmer kicked two more points for the seaside girls sandwiched between a beauty from Looney and all of a sudden it was back to a one point game. On the forty fourth minute Looney got in for the seaside girls third goal, quickly followed by a wonderful goal from Farmer after a sideline ball from Looney drifted in behind the backs and Farmer was on hand to finish. Farmer was on hand again to get her hart-trick after she palmed the ball to the back of the hill’s net after a great ball across the goal from Looney. With the game being a one point lead to the hill after forty minutes, seven minutes later the seaside girls had gone eight clear and were on their way to a first ever East Cork Junior A Title.
The hill, to be fair to them pushed hard for scores but the Aghada defense stood firm and kept them at bay. A great save on the fifty fourth minute by Bridget Wall led to a point at the other end from the boot of Christine Moran. Farmer and Looney were to finished the scoring for seaside girls and in the end, ran out comfortable winners on the score-line of Aghada 5-9 Watergrasshill 2-9. This was a great finish to the year for the juniors with a clean sweep of titles, County “B” Champions, County League Champions and East Cork “A” Champions. Well done girls.
After the game the cup was presented to Karen O’Connell by Philip Harrington Secretary of the East Cork Board. Karen thanked everyone for their help with this team during the year and also had high praise for the management team of Brain Leamy, Pa Farmer, Ian Rose, and Jennifer Lewis & Reece Bawden she also thanked anyone that helped out with the juniors during the year. She asked the girls to push on now and try to win the Junior “A” County next year which is not beyond this team’s capabilities.
Panel: B. Wall, Siobhan Mc Carthy, C. Tynan, K. O’Connell, S. Phelan, R. Phelan, S. Long, H. Looney, S. O’Driscoll, C. Moran, E. Farmer, S. Leahy, L. Mc Allister, A. Bennett, N. Fitzpatrick, S. Walsh, C. Counihan, C. Walsh, K. Wall, M. Sweeney, ER. Boylan, C. Mc Grath, A. Mc Grath, L. Linehan and L. Burchill.

U-16 “A” East Cork Championship Final

On Wednesday evening last Aghada made the journey to Sallybrook in Glanmire to take on the home side in the Final of the East Cork U-16 “A Championship. This game was played under lights but didn’t finish under light as they failed with just a few minutes to go in normal time , so the game had to be abandoned as the couldn’t be brought back on
The re-fixture will take place on Saturday next in Sallybrook at 2pm. In the match itself. Glanmire started the game at a hectic pace which the seaside girls took time to adjust too. The home side had the first two scores of the game before Eva Rose Boylan stuck the ball in the back of the Glanmire net for a goal for Aghada. A minute later Aileen Mc Grath did the exact same thing and the seaside girls had weathered the early Glanmire storm. Sarah Walsh and Lauren Mc Allister kicked two points for the seaside girls and now Aghada were dictating the pace of the game. Glanmire came again, and kicked the next three points before Aileen Mc Grath got the last score of the half, to leave the score at short whistle Aghada 2-3 Glanmire 0-5. A notable thing from the first half was some tremendous goal keeping from Olivia Dzjack, who pulled off some top class saves.

Glanmire started the second half the way they did the first, at a hectic pace and had the ball in the back of the Aghada net in the first minute. Megan Sweeney kicked a point before Mc Allister found the back of the Glanmire net to push the seaside girls four clear. Glanmire responded with a goal of their own and the game was now backing down to the minimum. Glanmire pulled level on the forty first minute and took the lead on the forty ninth. They pushed that lead out to two before Lauren Linehan got it back to a one point game. Glanmire got the next score and it was back to a two point game again with time running out. On the next attack the seaside girls were running at the Glanmire defense when the lights went out and the rest they say is history…
The referee in consultation with the East Cork Board gave Glanmire fifteen minutes to see could they solve the problem and with no solution to be found the referee had no choice but to abandon the game. The re-fixture is fixed for Saturday next in Sallybrook (Glanmire) at 2pm.
Panel: O. Dzjack, A. Quinn, B. Wall, K. O’Farrell, Aine Mc Grath, C. Walsh, S. Mc Allister, S. Leahy, ER. Boylan, Aileen Mc Grath, L. Mc Allister, M. Leahy, M. Sweeney, S. Walsh, L. Linehan, A. Hickman, K. Terry, E. Cronin, K. O’Keeffe, R. Leahy, M. Moran, M. Culligan and A. Rose.

Train with the Stars

We would like to thank all those who took part in our “Train with the Stars” camp on Saturday morning last. It was great to see such a large turnout of players on a bitterly cold morning. We would like to thank our Inter County Stars Emma, Rosin, Christine, Sorcha and Hannah for their time and knowledge that they gave to each and every player. We would also like to thank Anne Marie Mc Allister for organizing the event, to Laura Burchill who printed off all the posters for the event and to all the parents that helped out on the morning with refreshments for all the players. We would also like to thank the Mc Grath sisters, Ciara, Aileen and Aine, Ciara Counihan and Lauren Mc Allister for their help also. We hope and we think that each player left with some piece of knowledge to help them improve their game. Well done to all.

Tickets are still on sale for our Christmas draw, € 2 each or three for € 5, with some wonderful prizes to be won. This is a big fundraiser for the club so if you can support this draw please do so. Tickets on sale from any member of the club.

The Annual general meeting of Aghada Ladies Football is tonight Tuesday Nov 22nd in the GAA clubrooms in Rostellan. After a year of unprecedented success we hope to have a good turn out. We especially appeal to parents of the younger age groups to come to the meeting and while we realise you are very busy people with young children it is important we get your help please.
Success brings its own challenges and we would like as many as possible to come and have your say in how the affairs of the club are ran. . We would like to thank the Midleton News and East Cork Journal and the Evening Echo and Mary White for publishing our notes on a weekly basis and getting our news out to the wider community.

Our last game of the 2016 season will take place on Saturday next the 26th November v Glanmire in Sallybrook (Glanmire) at 2pm. 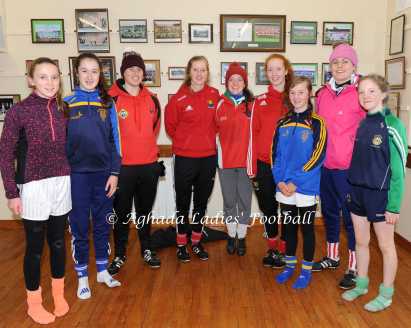 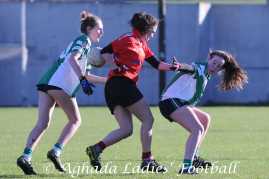 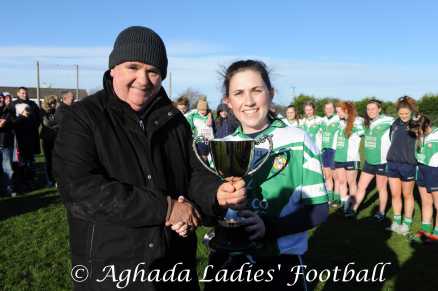 This entry was posted in Aghada News, East Cork Board News. Bookmark the permalink.