WATERGRASSHILL LADIES FOOTBALL CLUB MARCH NEWS
U7/U8
The u7/u8 girls resumed training on Saturday 24th March on WGH Astro Turf from 11am-12pm. Training resumed on WGH pitch on Tuesday 27th March from 6-7pm. Training continues as same.
U9/U10
The u9/u10 girls resumed training outdoors on Saturday 24th March (having trained indoors weekly from February 20th in Glenville NS) on WGH Astro Turf from 10am-11am. Training resumed on WGH Pitch on Tuesday 27th March. Training continues as same.
U12
U12 indoor football training resumed Tuesday January 16th indoors in Glenville NS. Training continued weekly until the girls took to WGH pitch on Tuesday March 20th. The girls competitive league games started with a home fixture v Na Piarsaigh on March 19th. The girls played successfully, winning on a scoreline of 2-13 to 0-1. Next up in their league was an away fixture to Fermoy on March 26th with the girls again winning impressively on a scoreline of 3-7 to 0-2. Next up is Lisgoold on Sunday 8th April. Best of luck to the girls in their league campaign.
U14
The u14 girls resumed training on Thursday 18th January indoors in Glenville NS and now train Tuesday and Thursdays 6-7pm outdoors on WGH pitch
U14 footballers have had to date 3 league games, the first game on February 17th v St. Nicks at home. The girls played really well in what was a thrilling second half game by all accounts and came out winners on a scoreline of 8-01 to 6-06. Next up for the girls was Carrigtwohill on Sunday 11th March in Carrigtwohill. Despite playing well the girls were unlucky to be beaten on the day on a scoreline of 2-05 to 1-05. As the league continued in March the girls took on Glanmire in their third league fixture on Thursday March 29th in Bucklearys cross. A great game of football exhibited by the WGH girls with a strong win on a scoreline of 4-16 to 2-04. The girls continue their league campaign in the month of April with a game scheduled for April 4th v Bride Rovers.
U16
The girls have been training indoors since Thursday January 18th and now train twice weekly on WGH pitch Tuesday and Thursday 6-7pm. The u16 league is well underway and we wish the girls the best of luck.
Minor Football
The girls have been training since January 18th indoors and now train twice weekly outdoors Tuesday and Thursday 6-7pm on WGH pitch.
Junior A Football
The Junior ladies training is well underway and the girls began their league campaign on the 11th March v Dromtarriffe at home with the ladies winning on a scoreline of 2-16 to 3-07. Their second league game v Douglas was played on Sunday 18th March away and again resulted in victory with a score of 2-08 to 2-02. On Sunday 25th March the ladies lined out v Dohenys in WGH and again these ladies were successful winning 2-10 to 1-10. Overall it’s been a convincing start to the Junior football league campaign and we wish them the best of luck.
IMPORTANT CLUB DATES IN MARCH
March 10th – Club Registration Morning
March 24th & March 25th – Annual Cake Sale 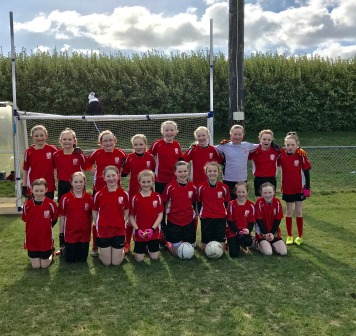