Well done to Abbie Hoare and Lily Murray, part of the Cork under 14 football squad that beat Waterford in the Munster semi-final on Saturday. The game was played in Ballinameela, Co. Waterford on a crisp dry afternoon.

Playing with the wind in the first half, Cork got off to a good start with three early points from Orla Deasy, Sophie Thompson and Orla Cahalane. Waterford scored the next point which was quickly answered by a point from Lucy Callanan. However, despite their best efforts, Cork were unable to score for the remainder of the half and Waterford notched up three more points leaving the teams level with four points apiece at the half-time whistle.

Cork came out very strong in the second half and an early goal from Lucy Callanan gave the team a much-needed boost. Orla Cahalane followed up two minutes later with her second point of the game and in the 42nd minute, Alanna Gould scored a goal, followed by a point a minute later. A third point from Orla Cahalane put the Leesiders nine points up with five minutes to go.

However, Waterford found another gear and scored two well-worked goals so that only three points separated the teams as the game entered injury time. Waterford continued to threaten and it was a tense few minutes before Orla Deasy scored the insurance point that saw a relieved and happy Cork team progress to the Munster Final. This game will be played on the 21st April; details to be confirmed.

CORK MINOR LADIES FOOTBALL
Great win for Cork Minor Ladies Football in O’Donovan Rossa GAS Skibbereen on Monday the 2nd of April, 2018.  Well done to Katie and Sarah.  Cork are now through to the Munster Minor Final.  Cork 4-12 Kerry 3-6.  Brilliant win girls and congrats to all the loyal supporters who travelled to support the girls.
Photo 1 Katie Quirke Jim Bob & Sarah Murphy
Photo 2 Katie & Sarah
U21 Ladies
Our U21’s to play O’Donovan Rossa on Sunday the 8th of April, 2018 time and venue TBD in the first game of the County Championship.
CUL CAMP
Date for your Diary: GIRLS CUL CAMP – Bride Rovers Ladies will be running our Summer Camp on Monday the 23rd of July, 2018 to Friday the 27th of July, 2018 (provisional date).  Summer Camp registration forms will be available closer to the time.
REGISTRATION
Registration Forms available from all trainers – please ensure your child is registered.
Bride Rovers Ladies Football & Camogie Club proudly sponsored by Spar Rathcormac and Barry’s Bar Rathcormac
Follow us on Facebook & Twitter @RoversGAA
Next clothes collection on Friday the 6th of April, 2018 at Rathcormac Community Centre  7.30 p.m. to 8.00 p.m. (garage to rear) 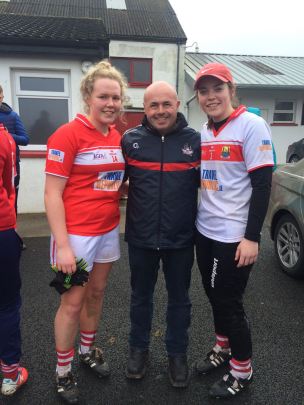 Check out our Facebook page for some #throwbacks! The 2016 archive was added recently😁
⚠️October ECB Meeting ⚠️
⚠️September ECB Meeting ⚠️
Another big name out to wish everyone good luck in this weekends #johnwestféile!
Loading Comments...