On Monday Katie Quirke & Sarah Murphy were in action with the Cork U16’s who won the Munster Final with a 7 point win over Tipperary in Mallow. Also part of the team were Kildorrery girls, Sally McCarthy & Aine Keating who . On Sunday Cork Intermediate Camogie team, with Mossie O’Sullivan as a mentor secured their place in the Division 2 League Final after defeating Carlow. On Saturday, Shaiuna Hayes was part of the Cork U14 camogie team that defeated Tipperary in a Camogie Tournament in Ballyagran, Co. Limerick.

Cork U16’s Win Munster Title
Cork 4-12 Tipperary 3-7
Cork took on Tipperary inn Mallow on Bank Holiday Munster to decide who would be Munster under 16 Champions for 2017. In an absorbing game of football Cork came out on top in a fascinating game that kept the large attendance on tender hooks right to the end. Forget about the final scoreine this game went right down to the wire and when Cork were reduced to 13 players they showed real grit. We often hear the phrase about the game of 2 halves well this went better and could be broken down into a game of 4 quarters. Cork raced into an early lead and had 1-5 on the scoreboard before Tipp registered their first score. Then Cork lost their inspiring keeper Sarah Murphy and one of the first tasks that replacement Jane Muvihill had to do was to pick the ball out of the net through no fault of her own , she subsequently made some marvelous saves one particular point blank one when Tipperary had come back to a 2 point margin with 12 minutes to go. The 2nd quarter of the first half saw Tipp come more into the game but Cork upped the ante with some great scores and by halftime they had opened up, what looked like a secure 2-11 to 2-3 margin. And that was after hitting the woodwork at least 5 times. Cork’s dominance stemmed from the control of midfield by Eve Mullins and Faye Ahern, while the forwards led by Katie Quirke, Fiona Keating and Jenny Murphy in particular tagged on the vital scores with 2 points as well coming form Ellie Jack who moved from defense to slot over 2 excellent points. Tipperary on the other hand were one dimensional relying on the surging runs of Caitlin Kennedy and Ava Fennessy who had the hard working Cork defense stretched to the limit on numerous occasions particularly in the 2nd half.

Inexplicably for Cork scores dried up in the 2nd half and they failed to score for all of 17 minutes mainly due to some wayward wides. By the end of the 3rd quarter Tipp had gradually whittled down the deficit to 2 points with a brace of goals one after a dubious penalty well saved by the Cork keeper but who had no chance on the follow up when the ball was booted on the ground to the net. Then apparent disaster struck Cork with 2 sinbinnings then they showed their true grit fighting back for 2 goals and led by full back and capt Bridget Wall they put up a wall of defense against a rampant Tipp. For once the ref seemed to give Cork a break and his 3rd penalty award favoured the rebels with a goal with 5 minutes to go and Cork soaked up the pressure to see out an exciting game in fine fashion.
(See photo attached of Cork U16 Team & Katie Quirke & Sarah Murphy Bride Rovers)
The Victorious Cork u16 Team who defeated Tipperary in the Munster Final.
(See photo attached of Shauna Hayes – Cork u14)
Shauna Hayes (right) pictured with Kate O’Neill, Julie Sheehy & Grace Ryan after Cork u14 Camogie team defeated Tipperery.

On Wednesday evening, the under 14 ladies footballers travelled to Glanmire to play their B team in the East Cork League. Bride Rovers were the slightly stronger team in the first half and were leading by seven points after twenty minutes. However, two goals in quick succession by the home side narrowed the gap to just one point at the half time whistle. Bride Rovers came out much stronger and more focused in the second half and a couple of early goals settled them. Their continued work rate and team effort in every position paid off and they notched up a large number of well-deserved scores. At the final whistle, Bride Rovers were the winners by a substanial margin, making it four wins in a row for this hard-working side. Well done girls!
Panel: Cliona Edmonds, Alice Murray, Abby Keating, Alanna Broderick, Lily Murray, Leah Hallihan, Caoimhe Gubbins, Shauna Hayes (4-1), Sarah Morrison, Meghan Buckley (0-1), Ava Hallihan (1-1), Kate Larkin, Ruby Hicks (1-0), Ciara O’Flynn (0-1), Caoimhe Barry (3-1), Ciara Morrison (1-0), Ava Barry, Mollie O’Connell.
U12 Blitz in Watergrasshill – See Photo attached

On Bank Holiday Monday we attended a Blitz in Watergrasshill. We played Grenagh, Watergrasshill and Castlemartyr .Our girls played brilliantly and a great morning was had by all. Many thanks to the dedicated parents who attended to support and to Watergrasshill for hosting.
U12 Panel Cliona Murphy,Oonagh Nagle, Nikita Parle, Ava Barry, Abbie O Connell, Eimear Hart, Aislinn Hart, Emma Collins,
Rachel Walsh, Ruby Broderick,Abbie Hoare, Lily Murray,Alex.

Our next Football league game will be on Sunday April 23 in Pynes at 3.00 p.m.

Following a great win over Carrigaline in the quarter final of the U21 Championship, we play Rosscarbery tonight (Thursday) at 7.15pm in the semi-final. Venue to be confirmed.
This will no doubt we a tough contest but if the girls play with the same work rate as they did against Carrigaline we have a great chance to advance to the final. Best of luck to team captains Trish O’Sullivan & Katie Connor & their team mates.

Senior League v Fermoy on Sunday
Our Senior Football team make the short distance to Fermoy this Sunday to take on Fermoy in our second league game. After the heavy defeat to Mourneabbey we are hoping to bounce back with a better performance. The time of game is provisionally set for 7pm.

Well Done James
Well done to James Bermingham & his team of umpires on officiating at the All-Ireland U21 Football semi-final between Dublin & Donegal last Saturday in Cavan.
James gave a fine display of refereeing.

Summer Camp
This year the Bride Rovers Ladies Football & Camogie Club summer camp will take place from 24th – 28th July in the afternoons from 2pm to 5pm. Watch this space here for more details in the coming weeks.

LOTTO AT €10,400
With no Jackpot winner on Tuesday April 11th the Jackpot for this past Tuesday was a massive €10,600. Thanks to all those who support our Lotto every week and remember if you’re not in you can’t win. 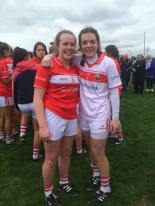