Well where does one start, after 140 minutes of football the Aghada U-16 Ladies created history on Sunday last in Mayfield when they defeated Kinsale in a pulsating County Final Replay. Words you could use to describe it are tension, thriller, excitement, but the word’s I would use are heart and determination. The seaside girls certainly had this in abundance on Sunday. .
Both teams were slow to settle into the game with nerves showing on each side. Sarah Walsh opened the scoring with a well taken point but this was quickly cancelled out by Kinsale when they scored two points of their own. Aileen Mc Grath drew the game level again with a great point Lauren Linehan put the seaside girls a point up again only for Kinsale to draw level again. Sarah Leahy and Lauren Linehan got the last two scores of the first half to leave the score at the short whistle Aghada 0-5 Kinsale 0-3.
One of the main highlight’s of that first half was a tremendous save from Olivia Dyjak one any keeper would be proud of when she stopped from almost point blank range.

The second half started with three goals one for Kinsale and two for the seaside girls, one coming from the boot of Lauren Mc Allister after great play out the field from the McGrath sisters, Aileen and Aine and the other a peach from the boot of Lauren Linehan.
Linehan kicked another point to push the Aghada girls six clear and Aghada looked comfortable but there was a still a kick left in this Kinsale team. They scored a goal and two points with out reply and all of a sudden the game was back in the melting pot with the minimum between the sides. The seaside girls pushed on again with points from Mc Allister and Linehan to put three between the sides at the three quarter stage. Again Kinsale came at Aghada and with eight minutes to play we were back level, 2-9 a piece. At this stage the question on everyone’s lips was will this game go to extra time. Mary Leahy kicked a wonderful point to push the seaside girls one up with the clock in added time but Kinsale had another chance to level the game after sixty five minutes of play which they took and bought this tremendous game to Extra Time.
The seaside girls opened the scoring in the first period of extra time with a point from the boot of Lauren Linehan. Then Kinsale got their third goal to push two clear. Would the seaside girls be able to reply? Aghada captain Sarah Leahy kicked a wonderful point to bring the game back to a one point lead with time ticking away. Then came the seaside girls third goal from the hand of Sarah Walsh after striking the ball in flight as it came across the Kinsale square and all of a sudden they were two clear with time almost up. Kinsale kicked another point and now the question was would the seaside girls see this game out and as mentioned above the qualities that shone through were heart and determination and when Kinsale came looking for the equalizing score there was no way through and the Aghada girls were crowned Cork County U-16 “A” CHAMPIONS 2016 to wild celebrations. The cup was presented to the winning captain Sarah Leahy by proud Aghada Man and County Board Representative Barry Moran. Sarah thanked Kinsale for their contribution to a wonderful game of Ladies Football, the referee for his handling of the game and the management team of Stevie Quinn, Pat Wall, Cathal Mc Allister, Shelia Linehan and Deirdre Culligan. There were three cheers then for Kinsale. After the photos were taken it was back in convoy to the clubhouse in Rostellan with the County U-16 “A” Cup in tow. Well done one and all and a special word of thanks to all who provided the hot cup of tea and coffee and the wonderful refreshments.
Special congratulations to Eva Rose Boylan who celebrated her birthday with a super performance at mid field and winning a county U 16 medal.
Aghada Panel: O. Dyjak, A. Quinn, B. Wall, K. O’Farrell, Aine Mc Grath, C. Walsh, S. Mc Allister, S. Leahy, ER. Boylan, Aileen Mc Grath, L. Mc Allister, M. Leahy, M. Sweeney, S. Walsh, L. Linehan, K. O’Keeffe, M. Culligan, E. Cronin, R. Leahy, K. Terry, A. Hickman, M. Moran and A. Rose.

The Minors are down to play Carrigaline in the County “B” Final on Sunday next the 13th. Time and venue TBC. We would like to wish the players and management the very best of luck in this Final.

The East Cork Junior A Final is fixed for Sunday the 20th of November against Watergrasshill at 3pm. Venue to be confirmed. Again we would like to wish the girls and management the very best of luck in this final as they go in search of the treble with the County and League cups already in the bag.

Tickets are now on sale for our Bumper Christmas Draw locally, with some great prizes, please support the club €2 a ticket of 3 for €5. We would like to thank all those who sponsored prizes for the draw and we would appreciate that you would support our sponsors in return.

Many thanks also to all those who supported us at our recent collection in Hurley’s Super Value Midleton. Thank you to all those who gave of their time and sit for an hour while the collection was on going. Finally thanks to Hurleys SuperValu for their continued support of our club Much appreciated.

Keep up to date with fixtures and news by following us on Face book or on Twitter @AghadaLGFC. 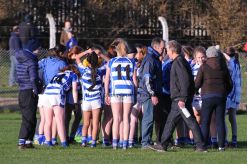 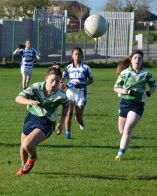 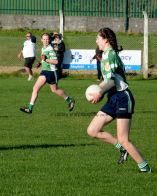 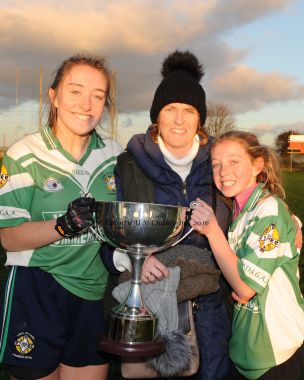