Midleton v Lisgoold League Playoff
Lisgoold girls got going quickly from the throw in and worked through some good points from long range points. Midleton then converted a goal from some fast accurate passing move right through the team. Then went to build up a strong lead with a quick succession of unanswered goals and some great point taking. Midleton set the tone for the rest of the match and the girls showed their determination and gave an excellent display of football.
Overall an excellent team performance and most encouraging to see all the key skills of the game being performed to such a high standard in all positions. All the hard work and dedication is the reason for our success this season.
Thanks to all the parents for bringing the girls along to the match your support is invaluable in ensuring that large numbers turn up for training and matches all season.
Well done to Lisgoold in their part in this competitive match and best of luck to Lisgoold in their own semi final.
Next up for the girls is the East Cork board semi final match versus Glanmire at home.
Training as normal at 7pm in the Rugby club on Monday night the 5th September.
Midleton team on the night was:
Kate Saunderson, Alyx Cahill, Alannah Megan, Kate o Sullivan, Sadhbh Harnett, Chloe Carr, Lilly Kelly, Áine Ryan, Grainne Finn, Saoirse Ní Theangana, Katie Smith, Kate Griffin, Rachel Ryan, Kelly Quirke, Isabella Nestor, Mia Hegarty, Roisin Crotty, Anna Dupas, Katie Tarrent, Amy Keeshan. Sheila o Leary Hayes, Ellen o Neill, Una Murphy

Minor East Cork League Round up.

The Midleton completed their east cork league campaign by playing 4 games over 6 days. As most of the panel were involved with our junior team, we concentrated on the junior competition before kicking off the minor league. Putting all our efforts into the juniors played off with a great win in the replay of the East Cork Junior final.
First game up against Youghal was played on Tuesday on a bamy summer night in Copper Alley. We had 16 girls available to us that night in this 13 a side competition. As Youghal had only 12 girls at their disposal, we matched their 12. This was a great game of football, and both sides played some good football. In the first half Midleton were wasteful in front of the goal with some wayward shooting, This was to be expected as it was the teams first outing as a unit. The girls did much better in the second and the longer the game went on the better the girls got. It was a big pitch for 12 aside and Midletons advantage of being able to bring in fresh legs was the difference, and the girls experience playing junior resulted them finishing stronger. This was a great result and it was very encouraging to see the older more senior girls on the team encouraging the younger members and including them in the game by passing them the ball. Youghal have some fine players and really put it up to our girls, but in the end Midleton came out on top on a score line of 2:11 to 1:4
Next up was away to Cobh on the Thursday night. Due to a number of injuries we had only 12 girls available to us on the night. Cobh had 15 but in a sporting fashion matched our 12. This game started off as a very one sided affair as the Midleton Girls stormed into the game from the starting whistle and were 3 goals to the good inside 5 minutes. To balance things up Cobh put on their 3 extra players and they started to play good football. This was a game that Midleton were always in control, but the introduction of the extra girls made them work that bit harder. This was a great fun game and both teams got something out of it. Both teams were wastefull in front of the goal but as the game progressed, improved. The encouraging thing about this game was the girls off the shoulder running and linked up play resulting in being able to move the ball from the full back line right through up to the forwards. We ended up with 17 points to Cobh’s 7. This is the first time in this teams history to accumulate such a score.
With confidence high we travelled to Glounthaune to take on Erins Own on Sunday Morning 21st Aug, on a wet miserable morning. Due to a number of our key players unavailable due to work commitments and two more due to injuries we had only 12 players available. Erins Own had a strong panel and again like Cobh matched our 12. This was just not going to be our day. Erins Own had a few very strong players in the middle of the pitch full of running that we just could not contain on the day. Try as the girls could we were just outplayed on the day and heavily defeated. The most disappointing aspect of this game was losing the services of our influential captain Lisa due to a dislocated shoulder injury.

Next up and final game was away on Monday 22th August to Fermoy in a double header in Fermoys St Coleman’s collage. In one pitch our U8’s gave a great account of themselves. In the second pitch we lined out with 13 as due to our mounting injury list we had limited resources. Fermoy on the other hand had 26 players togged of. With unlimited subs allowed this was always going to be a hiding to nothing. Caoimhe stepped up to take over the role of Captain in place of the injured Lisa and the girls agreed to ‘give it a go’. And by god did they have a right cut off it. From the start they stunned Fermoy with their attacking football and linked up play. After 10 minutes we went 3 points up after a fantastic passage of play that resulted in Abby firing into the back of the Fermoy net. Unfortunality as she struck for goal she was pulled back and from the fall suffered a broken wrist. This was a woefull loss. She was absolutely flying and Fermoy could not match her. Down to 12 players, Fermoy were also forced down to 12 as a result of a yellow card. Even though our legs were tiring we kept the pressure up. After the yellow card 10 minutes timeout elapsed, Fermoy restored their team to 13 players. This we could not match and they came into the game, plus their ease at changing out players and bring in fresh legs things got very difficult. But we were still able to stay with them, and eventuality after words of encouragement from the Midleton Coach, Fermoy eventuality levelled the playing pitch and took off their extra player. Fermoy got a very fortuitous goal on the stroke of half time to take a 3 point lead. Half time score 2:5 to Midleton. 2:8 for Fermoy. To say our girls were wrecked at half time was an understatement. They had given it their all and you could not possibly ask them to do more. The second half was just a step too far, and it was nearly dark when the game resumed. Fermoy changed their team around bring on a whole lot of fresh legs and struck some good points and a few goals. In the last 10 minutes we lost Laura through a hand injury and to curtail Fermoy’s dominance we pulled all our team back into the back line. Fermoys numerical advantage was the only difference between the two teams, and of all the four games, this was by far our best performance. They fought and played for each other, and every one of the girls encouraged each other to keep going right to the final whistle. If there ever was a game to build team spirit and comradeship this was it. What a bunch of girls. Midleton Ladies football Club is proud to be associated with them. Unfortunately we just came up short and didn’t qualify for county championship, but the reward for playing all our games is qualification for the East Cork Minor Plate that will be starting in September. So still a lot to play for. Minor Panel: Kate Mary Cullinane, Dionne Carroll, Deirdre Corcoran, Rhea Buckley, Abby Quirke, Molly Beausang, Laura O’Leary, Charley Moore, Caoimhe Morrison, Rayanna Power, Lisa Ahearn (Capt), Ciara Stack, Roisin O’Callaghan, Aoife Franklin, Lizzie Phiri, Sadhbh Beausang, Lucy Wallace, Ally Smith, Claudia Kearney.
Congratulations
Congratulations to Orlagh Farmer and the Cork Senior Ladies Football Team who defeated Monaghan on a scoreline of 2-10 to 1-10. They will now play Dublin on September 28th.

Training continues in Midleton Rugby Club for all age groups from 6.30pm. Keep an eye on Facebook and Twitter for all Club Updates. 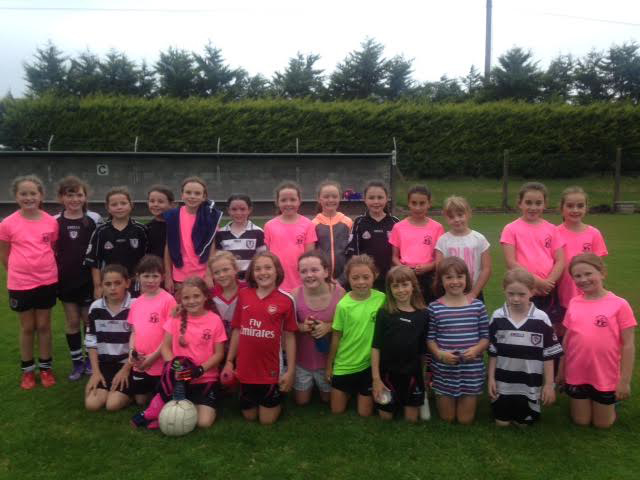 Midleton U10’s who played Lisgoold in the League Playoff.

This entry was posted in Midleton News. Bookmark the permalink.