U-14 East Cork League: (Nicola Nagle)
Lisgoold/Leamlara vs St. Nicks
On Saturday 30th April, our U-14 team had their last league fixture vs St. Nicks at home. Unfortunately, St. Nicks did not have a full team available to them and arrived with only 12 players. In excellent sporting manner, 3 of our girls volunteered to play the first half with St. Nicks so the game could go ahead 15 vs 15. The girls took to the pitch for this game like any other, regardless of having 3 of our players now playing against us, our girls looked really up for this game. From the throw in, we launched straight into the attack scoring almost immediately. We picked off some excellent scores and within a few minutes Lisgoold/Leamlara had taken full control of this game and were too strong for St. Nicks. Our girls on the St. Nicks team, tired their best for them – With one playing up forward, and two girls playing in defence, they stood up well under the on-going pressure from the Lisgoold/Leamlara team. At half time, the game was already well over as a contest with St. Nicks failing to register a score in the first half. Going into the second half, we gave our girls some things to focus on and to work on throughout the remaining 30 minutes. The second half was like a new game for them, they really tried their hardest as if everything was to play for. During the half time break, we changed around the 3 players playing with St. Nicks which added further strength and structure to their team. These girls again played as if everything was on the line and really tried their best. Impressively, the final score finished at 8-16 to 0-3, with one of our players scoring 2 of their 3 points.

At the end of this game, we couldn’t have been happier with the girls and how they played. This team have been working very hard since beginning training in January and all of their hard work seemed to come together in this game. We were especially proud of the great team spirit and sportsmanship shown by all of the players, as playing against your own teammates and friends is sometimes a hard task but our girls really showed fantastic attitude and played brilliant. It was the perfect ending of us in our League Campaign.

We will be hosting the Betty McCarthy Perpetual Cup U14 Blitz again this year. This will be held in June. More information to follow. This was a great success last year and we hope this year will be the same.

Lisgoold v Carrigtwohill
Age Group: Under 10’s
Venue: Lisgoold
Referee: Caroline Roche
Team:
Abbie O S, Lillie, Aimee, Kate A, Shona, Megan, Orlaith, Clodagh, Sarah, Kate, Carol, Sophie, Erika, Ava, Abbey O, Lainey
Tonight’s game was under 10’s first match of the season, against Carrigtwohill and was amazing to watch. It was the first time the girls played on the field due to the bad weather in the past. Training sessions were restricted to the hall and one session in the ball alley, however, the girls did themselves proud tonight.
For the first half the Lisgoold girls played down field with the advantage of having the wind to their backs. Erika scored the first goal followed by Lainey scoring the second goal and a point. All the girls showed great skills and determination to keep possession of the ball. Carrigtwohill keeper made three remarkable saves in the first half but this didn’t stop the girls from pushing through. All the team played with a great attitude and certainly seemed to enjoy the game.
The second half of the game had potential to be challenging playing uphill and with the strong winds picking up against the Lisgoold girls. This only made the girls push harder during the second half with the pre coaching chat from Vince at half time. The girls took on all the advice given and showed great team spirit. Carrigtwohill girls were challenging and showed great skill throughout the game. Lainey scored a great point in the second half giving Lisgoold a final score of 2 goals 2 points Carrigtwohill 1 goal 2 points.
U10 East Cork League
Lisgoold v Cloyne
28-04-16
Venue: Lisgoold
The second game of the season for Lisgoold under 10 girls against Cloyne showed improved skill and team sport. The girls enjoyed the game to the end with a final score of 5:12 to 2:2 to Lisgoold. Cloyne girls kept the game going, constantly working together to gain possession of the ball showing great team spirit.
Scores for Lisgoold: –
Lainey – 2:4
Lillie 2 points
Aimee 1:6
Erika 1 goal
Gemma 1 goal
U10 East Cork League
Lisgoold v Glanmire
Venue: Lisgoold
Date: 06/05/16
Team:
Lillie, Aimee, Kate A, Shona,
Megan, Orlagh, Clodagh,
Sarah, Kate N, Carol
Sophie, Erika, Ava
Abbey, Lainey, Caoimhe, Lucy
Under 10’s Lisgoold V Glanmire was a great game to watch. The evening was dry with a feeling of summer in the air as the girls gave their best play on the field. Glanmire were the stronger team playing with advanced skill and at half time holding a score of 5:1 to 2:2. The Lisgoold/Leamlara girls never gave up with amazing team work constantly trying to gain possession of the ball.
For the second half Lisgoold/Leamlara had the advantage playing downhill and scored 3 goals and 1 point. The girls are showing a consistent improvement at every game. Their skillful playing on the field is apparent, hand passing, kicking and team work is great to see, but most important is that the girls are enjoying themselves and having fun.
Final Score:
Glanmire 9:3
Lisgoold/Leamlara 5:3
U10 East Cork League
Fermoy vs Lisgoold
St Colman’s Pitch
Friday 13.05.16
It was a lovely day and a beautiful evening for a match. Lisgoold played uphill for the first half of the match. The second half saw Fermoy steal our lead. Our girls rallied in the last 10 minutes to narrow the gap. As testimony to their drive, one girl was running so fast after the ball, that her shoe couldn’t keep up. Scorer’s for Lisgoold: Lainey O’Sullivan (1-3), Carol Kelleher (2-0 Lillie (0-1) Unfortunately, it wasn’t our night but that said the girls should be proud of their performance.
The final score was Lisgoold 3-4 Fermoy 6-3
Team
1. Lucy 9. Lillie
2. Kate 10. Abbie O’S
3. Sophie 11. Gemma
4. Abbie O’D 12. Sarah
5. Shona D 13. Kate
6. Aimee 14. Carol
7. Erika 15. Megan
8. Lainey 16. Molly

U12 East Cork League.
Score Lisgoold 4:6 Cloyne 3:6
Team: Molly, Rachel B, Clara, Rachel M, Lainey (2:3), Ciara, Aine (1:4), Aoife, Eilis (1:0), Leanne, Siobhan, Rachel C, Emma, Dahlia, Chloe, Julianna
Our U12 girls had their fourth game of the season at home against Cloyne in awful conditions. The girls signalled their intent to win early on with a goal in the first few minutes. The ball stayed mainly in Lisgoold possession for the first half resulting in a score of 2:2 to 0:3 at half time. The rain kept coming down and was even worse for the second half. Cloyne came back into the game straight away with 2 goals and 2 points in quick succession. But our girls were not going to go down without a fight. They battled hard to ensure a win. Every player on the pitch gave it their all and there were some tired bodies after the match. Well done girls!!
U8 vs Erin’s Own away. Ten played. Abbey O S, Thea, Eva, Haidee, Aoibhe, Amy, Jessica, Ellen, Abbie, Sarah. Great first match of the season. Great fun. Referee from the home club was exceptional in letting the game flow and have words of encouragement to all the girls. Reminder: No training next weekend due to Holy Communion.

U16
Commiserations to Carrigtwohill especially Emma Murphy and Julianne Stack who lost to Na Piarsaigh in the East Cork League SF.
Cúl Camp
Kelloggs/Lisgoold GAA Cúl Camp.
Limited places are available for the GAA Cúl Camp which will be held in Lisgoold GAA Grounds from Mon 18th of July-Friday 22nd. Registration is available online at gaa.ie/kelloggsculcamps.
Congratulations
Congratulations to Sarsfields and Ella Woods who won their very 1st Camogie Feile. (2 goals & 1 point for Ella in the final) Well done Ella.

Well done to Lisgoold Gaa U14 boys who won the Feile B Final. Lisgoold 1-9 Tracton 0-03 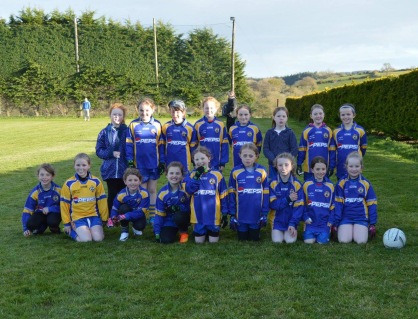