Registration Day
We are holding Registration on Saturday 30th of April in the clubhouse at Lisgoold Gaa 12pm-2pm. Registration Fees as Follows:
U8 €50
U10 €55,
U12/U14/U16/MINOR/JUNIOR €70
TRAINERS €20
COMMITTEE €20
All members will receive a €10 voucher courtesy of Lidl Ireland #SeriousSupport, and information regarding Injury Fund. Members will also be given to opportunity to see the new facilities at the club which include 2 new dressing rooms, a referee’s room, gym and meeting room.
We will also be doing a gear collection on the day. We would appreciate if anyone has old club gear such as Jerseys, Socks and Shorts if they would donate them to the club. Please and Thank you.

On Thursday evening last, our U-14 team played at home to Fermoy on what was a cold but sunny evening. From the very second the ball was thrown in, both teams attacked this game with great intensity. In the initial stages, both teams shared the possession until Fermoy begin to apply constant pressure on our defence. Our girls worked hard to get back into the game and looked promising in attack but failed to convert some of their opportunities, unlike Fermoy who capitalised on their chances. Half time had Lisgoold trailing by 5 points on a score line of 2-5 to 1-3.
After regrouping at half time, the tempo and skill of the game upped another level in the second half, with some girls covering what I’m sure is classed as Marathon distances, as the ball travelled quickly from end to end. The effort put in by our girls especially in the second half was a joy to watch with great team play and encouragement being displayed throughout the pitch. Due to excellent defending, Fermoy only managed 2 more scores in the second half (1-1), as Lisgoold/Leamlara continued to work hard and apply pressure on Fermoy all over the pitch. After being denied by the crossbar on 4 occasions, the goal and 5 points scored in the second half was not enough to see us past Fermoy who won the game in the end by just 2 points. The final score was 3-6 to 2-7 in what was an excellent game of football. Well done to all involved.
Team: Mary-Ellen, Leanne, Rhíona, Rachel M, Emma, Méabh, Dara, Jess, Laura, Anna (1-1), Aoife, Clodagh, Eilish (0-1), Claire (0-1), Kalyssa (1-4), Roisín, Theresa.

On Thursday 7th April, our U-14 team played at home to Glanmire. The game started off well for Lisgoold/Leamlara who launched into attack from the throw in. For nearly 15 minutes of the first half Lisgoold/Leamlara kept the pressure on with attack after attack scoring a brace goals to begin with and a great point also. However, a strong Glanmire defence got a grip on the game and kept scores to a minimum after this. Glanmire broke forward on several occasions and when in the danger areas took their chances when possible, to keep only a point between the teams at half time with Lisgoold/Leamlara leading 2 – 1 to 1 – 3.
When the teams swapped sides after half time, Glanmire upped the tempo of the game with the aid of a now very strong breeze. Lisgoold/Leamlara still battled hard to work the ball up the field but against the strong wind our defence found it hard to clear past half way. Glanmire capitalized on this, scoring some very good points. Lisgoold/Leamlara pulled together as a team and found holes again in this Glanmire side and managed to finish another two great goals to the net. The exciting end to the game saw Glanmire finish with just two points to spare. The Final Score was 4 – 1 to 1 – 12. Great display by our girls who are improving with each game.
Team: Mary-Ellen, Leann, Rhiona, Rachel B, Rachel M, Emma, Meabh, Sarah, Dara, Jess, Laura, Ella (1-1), Anna, Aoife (1-0), Clodagh, Eilish (1-0), Claire, Kalyssa, Roisin (1-0), Julianna, Theresa, Aine. 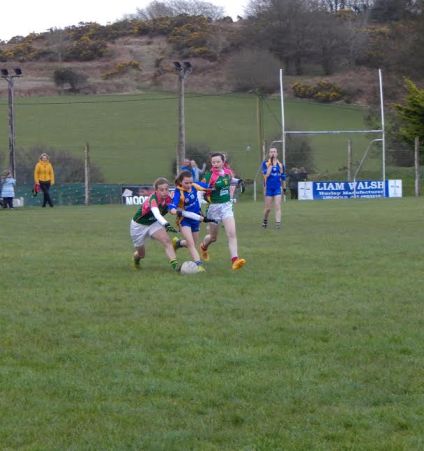 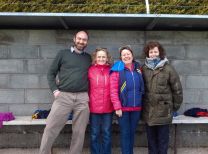 This entry was posted in Lisgoold News. Bookmark the permalink.