Congrats to our own Jennifer Barry who played an outstanding game of camogie on Sunday and to Cork Selector Mossie O’Sullivan.  The club is honoured to have such a talented player as Jen,  Well done and congratulations on such a fine achievement Jen and to all the Barry family Mick, May, Maria and Emma B.  We are so proud of you Jenny Barry.

Cork didn’t have a good start to this match down were going very well and were 0-05 to0-2 points ahead  after 15 minutes ,but for the rest of the half cork stormed into the game and led at half time on a scoreline of 0-7 to 0-05 , with the swirling wind favouring Cork in the second half the rebels started to pick off some super points after some great passing moves and then finola the girl from Ballynoe split open the down defence passed to Catriona Collins the ballerina from Ballinhassig finished to the down net to put daylight between the teams cork finished out the game winning by 7 points. All the Cork girls played well when they settled and it is brilliant for them having suffered two heartbreaking defeats in the previous two finals but our own Jen Barry from Bride Rovers at center back had an outstanding game and controlled the game from start to finish she was ably assisted by Amy Lee, Leah Weste, Sarah Harrington  ,Katlyn Hickey,  Finola Neville, Laura Hayes, saoirse McCarthy, catriona Collins and Carolyn sugrue,team a Lee,l weste, s Harrington cpt, n ni. CAoimh,l callinan ,j Barry,s Hutchinson,s Buckley,k hickey, l Hayes, F. Neville, S. M. Carthy,c sugrue,m McCarthy,c Collins, subs c Healy for m m carthy,r Killeen for L.callinan,scorers  c Collins 1-06 , F Neville 0-01, S McCarthy 0-03, C. Sugrue 0-02 C. Healy 0-01, Cork coach George Fitzgibbon ,Referee John Dermody Westmeath.

Last Thursday our u10s travelled to Killumney to play the home team of EirOg in 2 games.

The home team had previously won the Danniel Forde blitz so we were guaranteed a tough game and they did not disappoint.

The home team started the better with our girls finding it difficult to get into the game and so we went in at half time down by 3 points.

The 2nd half was a different story in both games with Rovers girls realising that they had to work hard and so they did with both teams putting in a great effort. With our defence standing strong and holding the home team scoreless for the 2nd half and our midfield and forwards moving the ball with immense speed and accuracy we were given some lovely scores and we ran out winners in the end.

Thanks to EirOg for the challenge and to both Bride Rovers teams for putting in a great effort.

We played Bishopstown on Thursday  the 30th in Bishopstown under lights. The city side hit the ground running and were 2-2 to no score up after 8 minutes.  It took us about 15 minutes to settle but with some very strong work from the backs and midfield we began to get  back into the game. We were behind 1-3 to 4-2 at half time. With a real emphasis on work rate and support play at half time, our girls started to become more involved in the game and get a grip with some very fast girls from Bishopstown. Some fine work and scores from the forwards brought the girls within 5 points of Bishopstown with about 10 minutes remaining. However we were never able to close the gap and the final score was Bride Rovers 6-7 to Bishopstown 8-8. Even though we were disappointed with the result it has to be said the girls were exceptional and should be proud on how they closed the gap and played so well.

Congrats to the U8 and U10 girls to took part in the annual Passage West Blitz on Saturday 8th of September, 2018.  Despite the weather the girls enjoyed themselves and played brilliant football.  Thanks to all to took part and to Francis and all in Passage West GAA for a fantastic day.  Well done.

Bride Rovers got a goal and a point quickly after half time and the advantage quickly swung our way.  Cloghduv fought to the bitter end and are a fine team.

On 8th of September 2018 we played Sarsfields G.A.A.  at Pynes Pitch. Despite the sky’s opening with driving rain our girls played a blinder against a strong team. Despite defeat 3-03 to 1-00 we were 3 pucks of a ball from a County Semi Final. I have to believe some of the Cork Senior team were watching and we’re inspired to their victory by watching the gallant play of the Bride Rovers U-12 Camogie team. 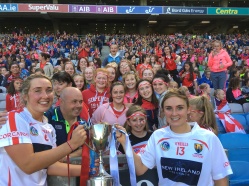