On Thursday afternoon Bride Rovers ladies football team played at home to Cobh in the first round of the East Cork Championship. We anticipated a difficult encounter and the home side got off to a good start with two early points from Ciara. However, this was soon cancelled out by two goals and a point in quick succession from Cobh despite the best efforts of the defenders and goalkeeper. Three points from Shauna clawed back some of the deficit but Cobh scored another two goals before the half time whistle, the score at the break 0-5 to 4-1. Despite the huge gap, Bride Rovers were positive coming into the second half as they had been playing against a strong wind in the opening half and the scores did not really reflect the team’s efforts and ability. Goals from Caoimhe Barry and Shauna and a point from Kate brought the Rovers back into the game and with fifteen minutes to go, there was only three points between the teams. However, Cobh responded with a goal and a point and the gap widened again to seven points. Depsite three further goals for the home team from Abbie Hoare, Caoimhe Barry and Lily Murray, Cobh kept responding with scores and were the eventual winners by a four point margin. Well done to both sides on a very competitive and sporting game which produced brilliant team work and effort by each and every player.
Panel: Cliona Edmunds, Alanna Broderick, Naoise McCarthy, Alice Murray, Niamh O’Sullivan, Leah Hallihan, Caoimhe Kielty, Shauna Hayes, Sarah Morrison, Ava Hallihan, Abby Keating, Megan Buckley, Kate Larkin, Ciara O’Flynn, Caoimhe Barry, Caoimhe Gubbins, Lily Murray, Abbie Hoare, Carol Kingston, Lili Czabany, Mollie O’Connell, Ruby Broderick

On Friday night last Bride Rovers Gaelic for Mothers and Others (G4M&O) hosted a mini blitz with Inch Rovers and Bishopstown travelling to provide great opposition and a fantastic evening of football was enjoyed. Our thanks to Liam and Sheila Mannix in Barry’s Bar for providing the much needed refreshments for the teams afterwards.

Bride Rovers G4M&O have been chosen to play at half time during one of the All Ireland Ladies Football finals in Croke Park on Sunday next 24th of September. These ladies have been training since May with the hope of playing on the hallowed turf on the biggest day in the Associations calendar. Bride Rovers have a panel of 22 who like all other clubs involved in this initiative are not playing competitive football. Each year the LGFA pick 6 teams to represent their clubs and counties at the half time exhibition games by asking the teams to enter a competition for this illustrious prize. Bride Rovers entered a well-rehearsed video that had members of the panel turning their hands to acting. Our sincere thanks to Ben Hogan for his professionalism with both the drone footage and the final compilation of the various scenes. Places were limited for the trip but the panel and mentors all set for the capital and representing the rest of the group are: Mary Ryan, Catherine Guinan, Marie Prior, Stephanie Jones, Sinead O’ Driscoll, Martina Hoskins Somers, Caroline Broderick, Catherine Hegarty, Fiona O’ Callaghan, Michelle O’ Brien, Kate O’ Driscoll, Clodagh Bermingham, Evelyn Murphy, Linda Ahern and Irene Hogan. The ladies will be looking their best in the specially commissioned kit supplied by Croke Park as part of the prize and with their new Bride Rovers club tops kindly sponsored by Liam Barry of Fermoy Print and Design. The entire panel is extremely grateful to Liam and all at Fermoy Print and design for this very generous sponsorship. While it is disappointing that the Cork Senior Ladies Footballers are not in the Senior final this year the Rebel county will be well represented by this fantastic bunch of ladies that have improved so much as a unit since the beginning of the season. Although this will be the final event for the team for the year the future is very bright for the Rovers G4M&O group which will undoubtedly go from strength to strength in seasons to come. For now though it will be a dream come true for some members to finally get to play in Croke Park in the twilight of their football careers and for others it is a great way to start their footballing careers. Either way it is a historic occasion for all involved and an experience that will no doubt live long in their memories. Finally a special thanks to the Bride Rovers Ladies Football and Camogie club officers for all their help and support throughout the season and to the supporters of the Mammy’s we look forward to seeing and hearing ye in Croke Park on Sunday. Rovers Abu.

Camogie Replay
The All-Ireland Intermediate Camogie replay between Cork & Meath will take place on the 1st October in Limerick at 2.30pm.
After an exciting contest in the drawn match this is sure to be another close contest. Bride Rovers are represented by Jen Barry on the team & Mossie O’Sullivan (Selector).
best of luck to Cork.

Championship Action
Lots happening on the field at present. Earlier this week our U16 girls played Douglas in the County semi-final (Tuesday). On friday night our minor camogie team take on St. Catherines in Ballynoe at 7.30pm. Monday see the turn of our U16 camogie team as they take on Eire Og in Ovens in 2nd round of U16 Championship. Saturday the 30th sees our Junior Footballers swing in action against Tadhg MacCarthaighs in the County semi-final while on Sunday 1st October our U12’s girls take on Naomh Aban in the County Final.

WEEKLY CLUB LOTTO.
The Jackpot for Tuesday September the 19th was €15,000. Please support the club by purchasing a ticket from members or from local businesses.

Bag Pack in Blackpool
Our annual Bag Pack Fundraiser takes place in Dunnes Stores Blackpool on Friday 27th & Saturday 28th October. This is a great fundraiser for the club. Any parents availe to help out please contact your team secretary ASAP. 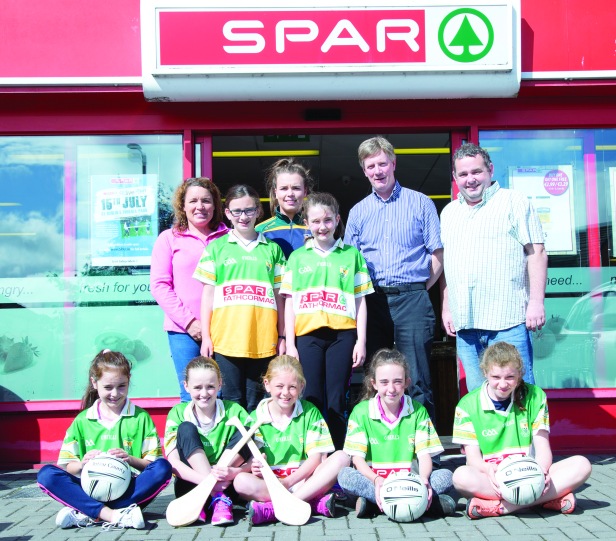