A fine crowd gathered in Mayfield on Saturday last to watch the 2017 Junior A Ladies Football Final. It was the first time that these two teams had met and also the first time that the Aghada girls were in an Adult A County Final. Unfortunately the weather didn’t play ball with a light mist falling for the whole hour.

It was nip and tuck in the early stages of the match with the seaside opening the scoring with two points from the boot of Emma Farmer. Christine Moran kicked the next point of the game before Naomh Abán registered their first score. Lauren Linehan and two points from the boot of Farmer had the score at Aghada 0-6 Naomh Abán 0-1 after twenty minutes play. Naomh Abán hit the next two scores with Farmer sandwiching one between them for the seaside girls. Then came the turning point in the game when a long run from Eva Rose Boylan put Farmer through to rattle the back of the Naomh Abán net and suddenly it was Aghada 1-8 Naomh Abán 0-3 at the break.

After the game the cup was presented to the victorious Aghada captain Emma Farmer by register of the County Board Barry Moran. Barry said it was a great day for the Aghada club by creating history and he was very proud and honoured to be handing the cup over to Emma.

Emma thanked her teammates for the hard work they had done all year and that it had paid off today with victory over Naomh Abán. She thanked the management and backroom team for all their work as well in the preparation of the team. Last but not least she thanked Naomh Abán for the game and told them to come back stronger next year and to have a big say in where the cup resides in 2018.

So now it’s back to the training field during the week as we prepare for the Munster Junior Club Semi Final where we meet the winners of the champions of Tipperary / Clare due to be played on the weekend of the 7th / 8th October, time and venue TBC.

Our U-12’s had a good win over Erins Own in the East Cork Championship on Saturday night last. They now meet Lisgoold in the Semi Final in Rostellan time and date TBC.

Another big game next weekend when the U-16’s take on Glanmire in the County A Final. The game is fixed for Friday night next, time and venue TBC. 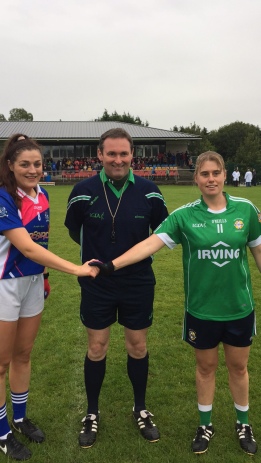 @munsterlgfa are running a great workshop online to support Club Mentors from Underage right up to Senior levels.
The Cork u14 team are having a great build up before their first Championship game vs Kerry on Wednesday 27th July at 7pm.🔴⚪
The Cork U16 team launch their 2021 Championship campaign next Wednesday 21st July v Tipperary.
⚠️𝙋𝙇𝙀𝘼𝙎𝙀 𝙉𝙊𝙏𝙀⚠️
Loading Comments...