Midleton’s Fe 12 Girls played in their East Cork Football Final on Saturday last August 26th at Lisgoold. These girls have been playing outstanding football all year and were looking forward to the experience of a final. There were some great performances on the day. Jill Connaughton brought off some wonderful saves. Isobel Nestor, Clara Collins and Sadhbh Hartnett were all rock solid for the full hour. Shelia O’Leary Hayes, Saoirse Ni Theangana and Ava McAuliffe dominated around the half back line. Aisling McCarthy, Selena O’Riordan Hernandez ran their legs off and supplied some great ball to our forward line. Ellen O’Neill, Amy Murray and Kelly Quirke contributed handsomely to Midleton’s game. Katie Smith, Aoife Fitzgerald and Rachel Ryan had lots of shots on goal. Rosin Crotty, Lily Kelly, Cara Foley and Eva McSweeney when they got their chances proved very worthwhile contributors to a gallant effort from the Midleton girls on the day. Unfortunately we came up just a little short but this game is really going to stand to us as we progress through the age groups.

Thanks to Lisgoold for providing their pitch and referee Niall Barrett for his excellent handling of the game.

Next game is in beautiful Rosscarberry on Sunday September 3rd of September for the first round on the County Championship. Details will be supplied to parents via text during the coming week.

On Friday evening our Junior Girls travelled to Glanworth to take on Glanworth in Round 4 of the Junior A Cork County football Championship. The last time these teams faced each other was last years Intermediate league game which Glanworth won by 2 points. A lot can happen in a year and the midleton team that travelled on Friday had no resemblance to that team last year. This year we are down ten starters from that team for various reasons and struggled this year in the grade. To still to be able to put out a team at this level is an achievement in itself. On the back of two defeats against Aghada and Douglas we needed something badly from this game.

On a lovely afternoon for football on a great pitch we started spritely and from the throw in attacked the glanworth goal. Before Glanworth could settle we had four balls over the bar. The girls came with a different approach for this game, we were more focused and tuned in, and we played football. Our link up play was fantastic and our defence were ferocious in the tackle and the fight for the break away ball.

After about 10 minutes Glanworth settled and came into the game, and the next 20 mins was end to end stuff with Midleton being the most accurate in front of Goal.

We were the dominant team in the first half and that was reflected in the score line.

We started the second half full of confidence and started with another point. But then for the next 10 mins we completely lost our way and just could not get the ball out of our defence. Glanworth completely took over and brought the score line back to 1 point. However even with our backs to the wall the girls didn’t panic, even though the same could not be said about certain mentors. Fifteen minutes to go it was only a one point game when Kate Marys kick out found Roisin and this started a fantastic team run up field that resulted in a point. For the kick out we pushed up and found ourselves 4 points to the good. The girls work rate was phenomenal, they literally ran their socks of and attacked the glanworth forwards in packs and defended as if their lives depended on it. They didn’t allow the glanworth girls the same time and freedom on the ball and we started to pick off some great scores

Midleton finished very strongly in a very enjoyable competitive game. This team have fantastic Individual players but when they play as a unit they are unstoppable.

Unfortunately this ends our involvement in the Cork County Championship but sets us up in a good position for our upcoming clash in the East Cork Junior Championship where we have qualified for the Semi Final against RockBan. 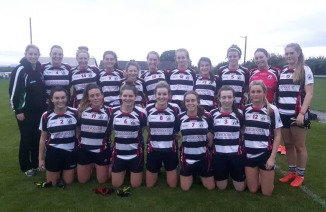 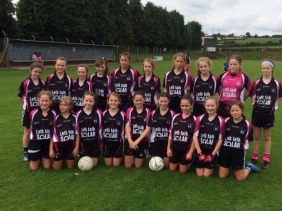