A large crowd gathered in Garryvoe Hotel on Friday night last to celebrate the achievements of the Ladies’ Footballers at U-14, U-16 and Minor level in 2016.

This celebration night was run in conjunction with the Juvenile section of Aghada GAA and Aghada Camogie Clubs as a triple celebration.

The shorts and boots were put away and replaced with dresses and heels.

The evening started with a beautiful meal prepared by the Garryvoe Hotel, this was followed by an address from the new Ladies Football Chairperson  Aine Cronin. She thanked everyone involved in the club for their efforts throughout 2016. We had nine girls on Cork teams a record and five of them won All Ireland medals with their county three senior and two minor.  She thanked the Senior Club for the use of their splendid facilities, Barry Moran for his work with the County Board and East Cork Boards on behalf of the club and also for all the photos he takes at matches, the parents for bringing the girls to training and matches, the coaches for all the work they put in coaching the girls, without this, the girls could not develop their skills. Last but not least she thanked the players themselves for the commitment and dedication they showed all year to the various teams they were involved with and said it’s onwards and upwards for 2017.

Next to speak was Roisin Phelan who thanked the committee for their work looking after the affairs of the club. She spoke about commitment, that if each and every player, can buy into it, she could see the club playing Senior Ladies Football in the next few years.

When the speeches had ended it was onto the presentation of the medals to the various winning teams. Roisin Phelan and Emma Farmer two of our All Ireland senior medalists presented the medals to each player as they made their way forward to tremendous applause.

When the formalities ended it was over to DJ Shane to dance the night away. The heels were put away and it was bear feet as Aghada’s adopted anthem “Caledonia” was belted out.

Many thanks to Vera Terry, Anne Maire Mc Allister and PJ. Hurley for organising the event which was a wonderful success.

You still have time to support our Christmas Draw which takes place on Sunday next at 5pm in the clubhouse. Tickets can be got from any member of the Club, € 2 each or three for a € 5. Can I thank at this stage all those who sold tickets at the Christmas Bizarre last Sunday and can we have a final push this week before the draw on Sunday night.

Our AGM took place last Tuesday week. For a club that had such a wonderful year the crowd was relatively small at the AGM but many thanks to all who did come . We need support and help to run the club and the same people can’t do everything. The Ladies Football cllub is for everyone and we need help to drive it on together with old and new people. New people bring new ideas and this is what we need

The Secretary Anne Marie presented her comprehensive report on the activities of a great year. After some discussion on the report it was adopted.

Michelle presented her Treasurers report which again after some discussion was adopted. Finance plays an important roll within any club and without fundraising and sponsorship we would not be able to survive. It’s a very tight budget and we are grateful to Michelle for her work in this role.

Our chairman Paul Fitzpatrick  then address the gathering and thanked everyone involved in the club in any way for all their hard work in 2016 and wish the club every success in 2017.

Next up was the election of Officers. Paul was stepping down as Chairperson for which we thank him for his work.  Aine Cronin took over as chairperson with  Liam Robinson as Vice Chair with Anne Marie Mc Allister  re-elected Secretary and Michelle O’Driscoll re-elected Treasurer, Pro Cathal McAllister and Registrar Laura Burchill.

Best wishes to all officers, committee, players and all involved for 2017. 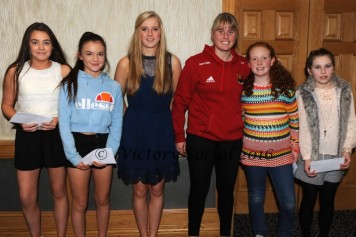 This entry was posted in Aghada News, East Cork Board News, News. Bookmark the permalink.